Let’s Answer Your Questions on ACT and SAT Test Prep!

Many students and parents begin the college prep process by comparing the ACT and SAT tests. To help shine some light on the topic, The StudyPro convened a panel of local experts at our office, featuring representatives from three top test-prep companies.

To start, it’s important to know that while in the past, some universities may have favored one or the other, these days any school will accept either test as part of an application for admission. Each test is given multiple times throughout the year, and can (and usually should) be taken more than once. This means it’s up to you and your teenager to determine which test to take and when.

What are the Differences Between the ACT and SAT?

With that in mind, we called on our expert panel to explain the differences between the ACT and the SAT and how to choose between them. The tests are pretty similar, but there are some differences. The most important differences involve length and difficulty. The SAT tends to be the more demanding test for many students, with a higher complexity of language and ideas in its reading comprehension sections. Meanwhile, the ACT usually takes students longer to complete, so while it is often easier to understand, it can be harder to finish in the allotted time.

Beyond that distinction, our experts highlighted a few others. The SAT is divided into sections focusing on reading, writing/grammar, and math. The ACT has these as well, and also an additional science section that presents graphs and charts to test students’ data-analysis skills. (The SAT tests these skills too, but with questions embedded in its reading and math sections rather than as a stand-alone section.) The ACT’s science section presents material that many, especially younger students, are relatively unfamiliar with, and it tends to be where they struggle the most. In their math sections, both tests focus largely on algebra but about one quarter of the ACT’s questions are based on geometry.

Which Test Is Right For My Child? ACT or SAT?

These differences tell us a lot about which test could be right for your student. Concerns about the time factor are important – for example, a fast reader will have a natural advantage on the ACT, as slower readers may struggle to finish on time. However, for kids who will take the tests with extra time accommodations (due to learning differences), this pressure is lessened or removed, rendering the ACT simply an easier exam than the SAT.

The tests’ administration schedules vary, so your student’s personal calendar can be another important factor in choosing a test. Sports, final exams, travel plans and other individual issues can make one timeframe a better fit. Diagnostic testing (aka assessments that will help to determine which test is better for your child), which all of our panelists’ companies provide, can also help determine which test to take. And the good news is that, given the similarity between the ACT and SAT, a student who determines that one may be better than the other will still benefit from whatever work has already been done if they decide to switch. 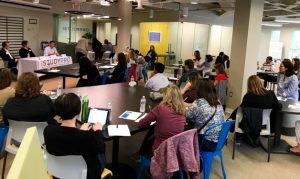 When Should My Child Take the ACT or SAT?

Our panelists had lots of tips for how to think about this. As the tests are offered multiple times throughout the year, your student’s individual schedule matters here as well. Finals anxiety? Maybe summer test is a good idea. Intense spring sports? Think about a fall timeframe.

There’s also the question of what year to take them. In general, students should already have a school-based background in the subjects before setting out to study for these exams. After the relevant material has been introduced – usually during sophomore year – the kid is well-situated to begin test prep. Of course, there are individual situations where the general timeline may vary, such as early recruiting for sports or students on an advanced math track. But don’t push your kid to take the tests too early, which can lead to low scores and diminished morale.

Our experts suggested a goal of having at least one score your student is happy with by the end of 11th grade, so that upcoming choices about college visits and applications have numbers to guide them. A good score is one that’s within the 25-75th percentile range for a school that’s a match for the student’s grades.

What About “Test Optional” Schools?

Our panelists also discussed the trend of schools going “test optional,” which means they don’t require either exam as part of a student’s application. Around 25 percent of schools have adopted this approach, creating many good options for students who really struggle with standardized tests. However, a decision to go the test-optional route will mean eliminating around 75 percent of all schools from contention, so our panelists’ best advice was to plan on taking the tests and perhaps consider the test-optional approach only later.

Also, keep in mind that even test-optional schools may require tests for certain programs or benefits. Your student may be relieved to hear that a test-free path is available, so the existence of this option can bring stress relief if nothing else. And, lower stress can mean better test performance!

Most students will take the SAT or ACT more than once, giving them additional shots at the score they want. With the ACT, a student doesn’t have to worry about being dragged down by a low score, as any score can be expunged from the student’s record upon request. With the SAT, scores can only be expunged in the first few days after the exam –importantly, only before it’s been scored, so there’s no chance to see how your student did before making this call. The SAT does offer a policy of “score choice,” where students can pick which score is sent to schools. But the chance to do this is dependent on the school itself, and some schools – especially the most competitive ones – may ask for all scores to be sent.

“Superscoring” is a school policy whereby the top score in each individual section is compiled from multiple tests. Again, this is a decision made by individual schools, so its relevance varies depending on where your student applies. Our experts said that most schools are willing to superscore SAT results, while ACT results are far less likely to be superscored, or may be superscored partially under complex formulas.

Although expunging and superscoring are good tools for getting those extra few points on a score, don’t make the mistake of counting on them to make up for real deficits! Your student should work on getting the best scores possible in every case, and only think later about these options to inch them up.

Under the ADA, kids can take college admissions tests with accommodations for ADHD, learning differences, and other reasons. Schools don’t receive information on when accommodations have been used, so students who need them don’t need to fear being penalized for it!

These accommodations most commonly consist of giving the kid extra time to take the test, or sometimes allowing it to be spread out over multiple days. In general, students can only get test-day accommodations if accommodations are already in place in school.

With the SAT, the accommodations process is relatively simple. If the accommodations have been in place at the school for four months or more, documentation from your school’s learning specialist is generally all that’s needed. Once a student has received accommodations, they can be used for all college board testing.

The ACT can be more difficult. Having accommodations in school is important, but there also may need to be a paper trail documenting the student’s need for them. It’s not uncommon for students to be initially denied a request for accommodations on the ACT. However, this denial is accompanied by a letter outlining where the application fell short, which makes appealing the decision, with the needed information, easier. Accommodations must be requested each time a student tests and applications should be submitted as soon as possible, after signing up for the ACT, especially given the possibility of such an extended process.

Test prep companies, like those run by our expert panelists, can make a huge difference! The pros at these companies have been helping students do their best for a long time, and they know what works and how to help. Each expert’s company has its own special areas of strength. Capital Educators runs small-group courses at schools and other sites around the area, while PrepMatters and Top Score Education do one-on-one tutoring. Capital Educators’ philosophy is to focus on equipping kids with the skills and experience they’ll need to take the test without giving homework. PrepMatters’ focus is on a student’s knowledge, process for arriving at answers, and motivation. And Top Score Education’s philosophy is based on how much higher students’ capability is than they realize. Any of these companies can help provide the extra edge your child may need to prepare for and ace that exam! PrepMatters has centers throughout the metro DC area where students tutor and Capital Educators works with students in their homes.